There are multiple camps near Cannon Ball, North Dakota, on the Standing Rock Indian Reservation.

Camp of the Sacred Stones has been active since April 1, 2016 but since mass protests began in mid-August, we’ve seen a huge influx of campers. There is now a large camp on the north side of the Cannonball River called Oceti Sakowin Camp. Red Warrior Camp is also located there. These camps are not officially affiliated but all share the common goal of protecting the water from the threat of the Dakota Access Pipeline.

Direct yourself to Cannon Ball, ND. You will arrive via 1806. Turn (left if coming from the north, right if coming from the south) when you get to Cannon Ball Pit Stop, a red building off of 1806. Keep on that road (the road turns a few times but just keep on it) until you reach a cattle guard. Cross it and turn right onto the dirt road. Follow signs to Sacred Stone Camp.

If coming from the south, keep going on 1806 past Cannon Ball, until you cross the Cannonball River bridge and leave the reservation. Continue on and cross one more bridge and then you will see the big camp on your right. If you’re coming from the north, you will see the large camp on your left before you reach Cannon Ball/Standing Rock Reservation. 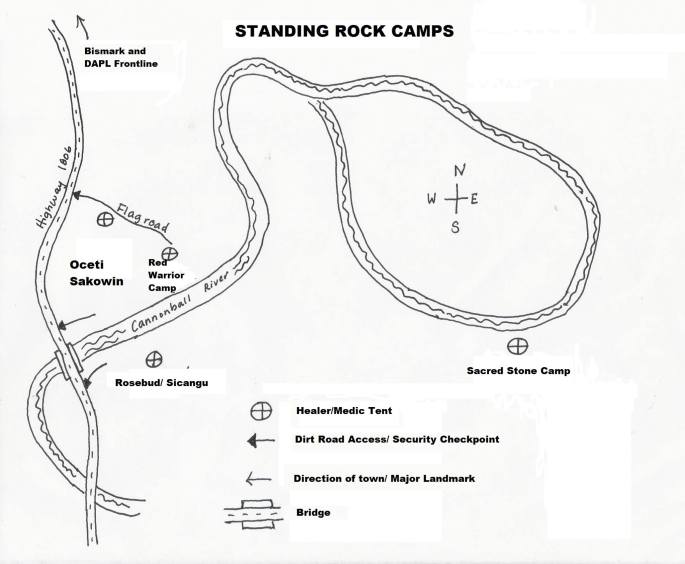